This book review is by one of our local young people:

If I could pick one word to describe this book, it would be astounding! I was launched
into a world of fast-paced action and magic from the first page, and I found myself devouring every word of it. This is a very well-written work, with artful prose and a beautifully painted culture and society full of magical shapeshifters.

The main character – Anders – struggles with self-esteem issues, which I imagine many
people can find relatable in today’s world. There is a smattering of violence, but it is not
described graphically – unlike other books, such as Warriors by Erin Hunter or Wings of Fire by Tui T. Sutherland – which makes it appropriate for the younger readers who are looking for some action. The fighting is just that – fighting. There are no heads getting ripped off or people being burned alive or bones getting smashed, and I found this surprisingly refreshing. The story also has some educational and inspirational purposes, as it teaches readers how to believe in themselves, as well as trust their friends to protect and stand by them during tough times. Also included are morals surrounding being supportive of your siblings, which is a valuable lesson to teach young readers. As to education, throughout the story there are subtle explanations of wolf behavior, such as nonverbal signaling, which I found to be accurate in all respects.

Overall this was a wonderful read, and I am eagerly awaiting the next installment in the
series. In fact, the only problem I had with the story is this – it was too short! I highly
recommend it to anyone who has an abiding love for fantasy and animals.

This is a review of the new book A Possibility of Whales  by S. D., a 6th grader: 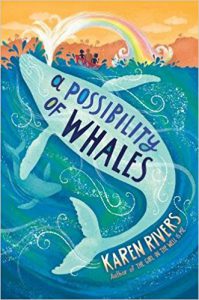 (This review contains possible spoilers for the story.)

In the book A Possibility of Whales by Karen Rivers, there is a girl named Natalia.  She lives with her dad and doesn’t know who her mom is.  Natalia moves to a lot of different places because her dad is a famous movie star named Xan Gallagher.  She lives in San Francisco and makes a new friend named Solly (pronounced “sol-yay”).  Then she moves to Canada and makes a new friend named Harry.  His parents thought he would be a girl and they named him Harriet–Harry for short.

To celebrate Natalia’s 13th birthday, her dad takes her to Mexico and invites Harry and his parents.  Since Natalia loved whales so much, her dad let her go on a boat with Harry to see some whales, but the boat breaks and the whale saves them from drowning.

I recommend that 12 year-olds or higher read this book.

This review is by Aditya: 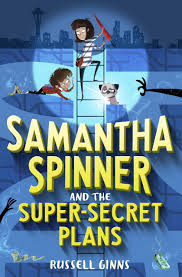 The book Samantha Spinner and the Super-Secret Plans by Russell Ginns was very enjoyable.  This book included a lot of interesting facts about things all over the world.  The book is about a girl named Samantha whose uncle goes missing.  The uncle left things behind for her family, but Samantha thinks that what she got is unfair.  Her sister got a check for $2.4 billion dollars.  Her brother Nipper got the New York Yankees.  Samantha only got a rusty red umbrella that says, “Watch out for the RAIN”

Suddenly, Samantha notices some marks on the umbrella that lead her and her brother to many different places in the world.  The names of the places are Dynamite, Paris, Baraboo, Duck, Zzyzx, Wagga Wagga, Wahoo, and Exit.  They traveled around the world in a magtrain.  Some of these places did make sense at first, but then they took a closer look at the names and they figured out what they meant.

While they are visiting all these places, there are ninjas trying to steal the umbrella.  The ninjas trace Samantha and Nipper down by placing a chip on them so they can be located.  Soon, Samantha figures out that the umbrella her uncle gave her is very precious.  This umbrella leads her to some super-secret plans.

This book would be a very good read for kids from third to fifth grade who like suspense and mystery.  In conclusion, this book was very enjoyable and I think it is going to be very popular in the future.

One of our local library youths wrote a very nice review of the book The Librarian of Auschwitz.  Based on her review, we’ll buy a copy for the library!  Encourage teens you know to stop in and choose a book to review, and we’ll post it here!

The Librarian of Auschwitz by Antonio Hurde Book Review
By O. H.

The novel The Librarian of Auschwitz, is a very interesting work. This book is about a Jewish girl, Dita, who lived in Auschwitz. She spent time taking care of books, at the risk that if she had been caught by the SS guards, she would have been put to death.

In my opinion, this story is a very interesting account of what it was like in the lives of the Jewish people during the Holocaust. I feel like Hurde did a very good job writing this book by how well the characters were portrayed. I liked how when a new character was introduced, he wrote about their lives before they were brought to Auschwitz. I also like how realistic Hurde made Dita’s character, and brought her to life. Even though she is only 12 years old, her character is very brave and mature because of what she went through. I also think that this book is well sequenced. Hurde brings out the character Hirisch in the beginning, and gives us some detail on what his character has been through and what he’s also like, before introducing all the characters and the story line.
Hurde also shares information on the circumstances that one had to live under in Auschwitz, going into detail about the school the characters attended; what children were and were not allowed to learn in school and how schools were not allowed to have books. Hurde also shared other examples of the harsh conditions Jewish people faced. For example, they would need to share rooms and beds with others, and often would not have enough to eat, facing starvation.

In all, I like Hurde’s creativity in writing this book, yet he used a lot of information about the people of Auschwitz during the war, and expresses the sad and true reality of what their lives were like.

People who like books about the history of the victims of the Holocaust or on concentration camps during that time, or, who are just curious and want to learn more, will appreciate The Librarian of Auschwitz. It is a good read that gives a lot of insight to those times and events.